And then once again comes the hurricane
fan the flame to make it even brighter than it was before
- C. Scott & D. Dyer

Leila Gordon is the nominal owner of a ranch. Her father died and left in her possession an heirloom: a bracelet containing a map bearing the location of a gold mine on the property. The ranch's foreman, Joe Dokes, is also after the map and hires Tom Latigo to secure it so that he can gain access to the gold mine before Leila can. Tom soon discovers what Dokes in up to, and physically confronts him about it, taking him on in a fistfight, along with a henchman named Vaquerelli. Leila soon discovers Joe wants her bracelet for a reason, and confides in Tom what she knows about the gold mine. Tom wastes no time in helping her nail Joe while at the same time escaping his repeated clutches. Billy, the young brother of Lelia, is a hero-in-training as he sides with Tom, taking immediately to the tall, strong, handsome man who will faithfully help the Gordon family.

The climax has Leila escaping the bandits in her car and with nowhere to go, almost ends up going over the edge of a cliff. Just in time, Tom rescues her by lassoing her while on horseback. The car goes over the cliff and ends up in the river below. Dangling precariously over the edge, Leila sees the rope eventually giving way, ready to break when Tom thinks faster than a bolt of lightning, tying the other end of the rope around himself, and falling down the side of the cliff to be next to her. In an extraordinary stunt, Tom has Leila under one arm, while at the same time hoisting both of them up by the rope along the side of the cliff, back to solid ground. Once again Tom has to rescue Lelia, but it is from a cattle stampede on the ranch.

“The Cowboy Musketeer” is a gripping western with a reasonable amount of suspense, and Tom Latigo is much like his later Tom Wade characters – the good guy posing as the bad guy in order to expose the thieves who are after the gold mine map. This silent film has all the common elements of a western: the hero, the girl, and young boy, but what really stands out here is the rescue attempt, and Tom's spectacular feats of strength (what girl would not want to be rescued by him?). The Film Daily states that Tyler has “an intelligent sense of acting values” - not bad from someone who took a correspondence course in acting. During the filming of this movie, Tom Tyler has an accident where his lasso slips over the neck of his horse on the cliff while he has Frances Dare in his grasp, and the couple hang on to each other tightly as they fall into the waters below. By some miracle they survive without any serious injuries and were able to continue filming.

Four merry musketeers of plain and prairie – one for all and all for one! (The Monroe News-Star, Monroe, Louisiana, February 19, 1926)

A secret gold pocket in the mountains – a bracelet that holds the key to the hiding place of treasure, romance, love, adventure! (Motion Picture News, December 26, 1925) 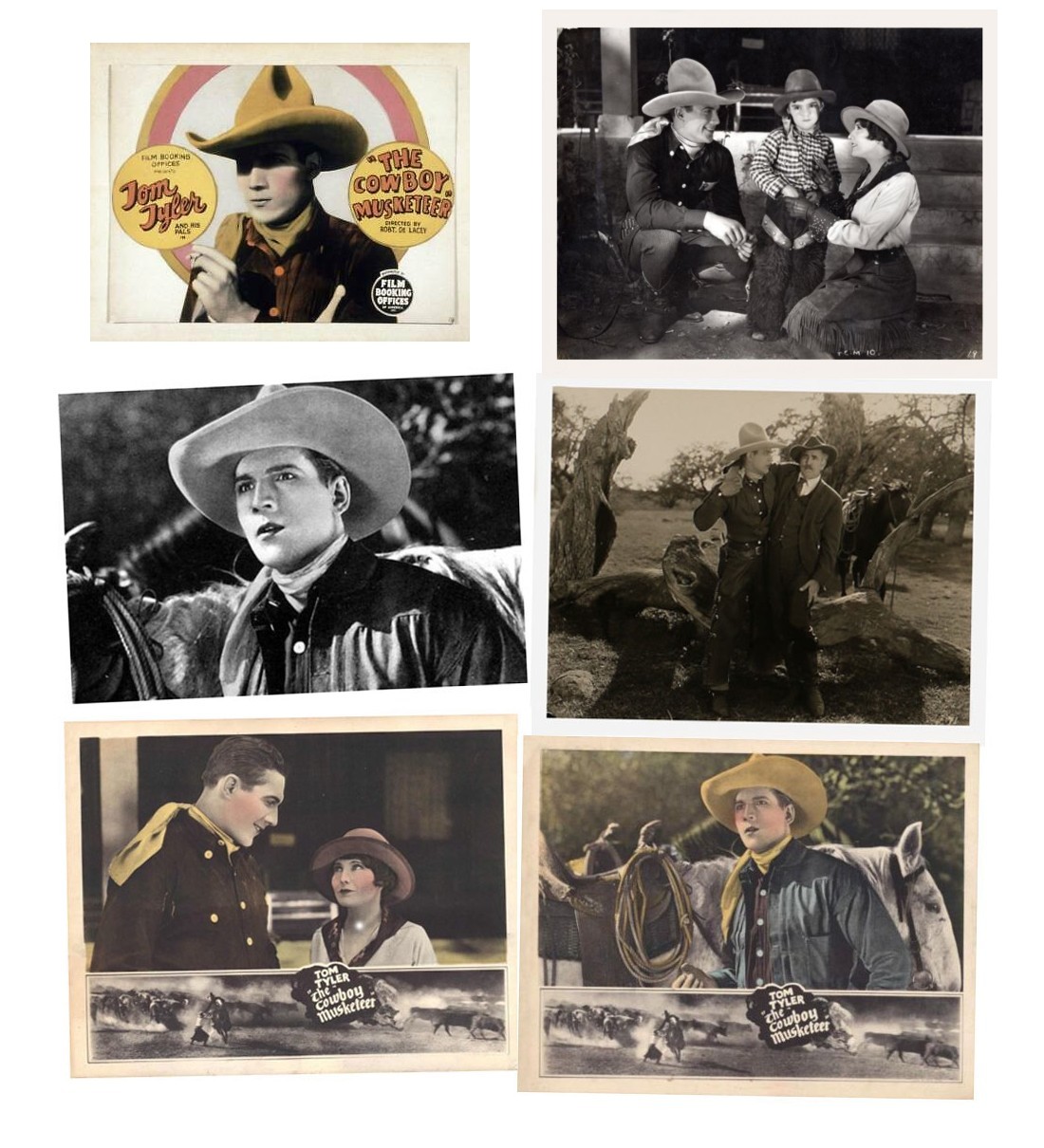 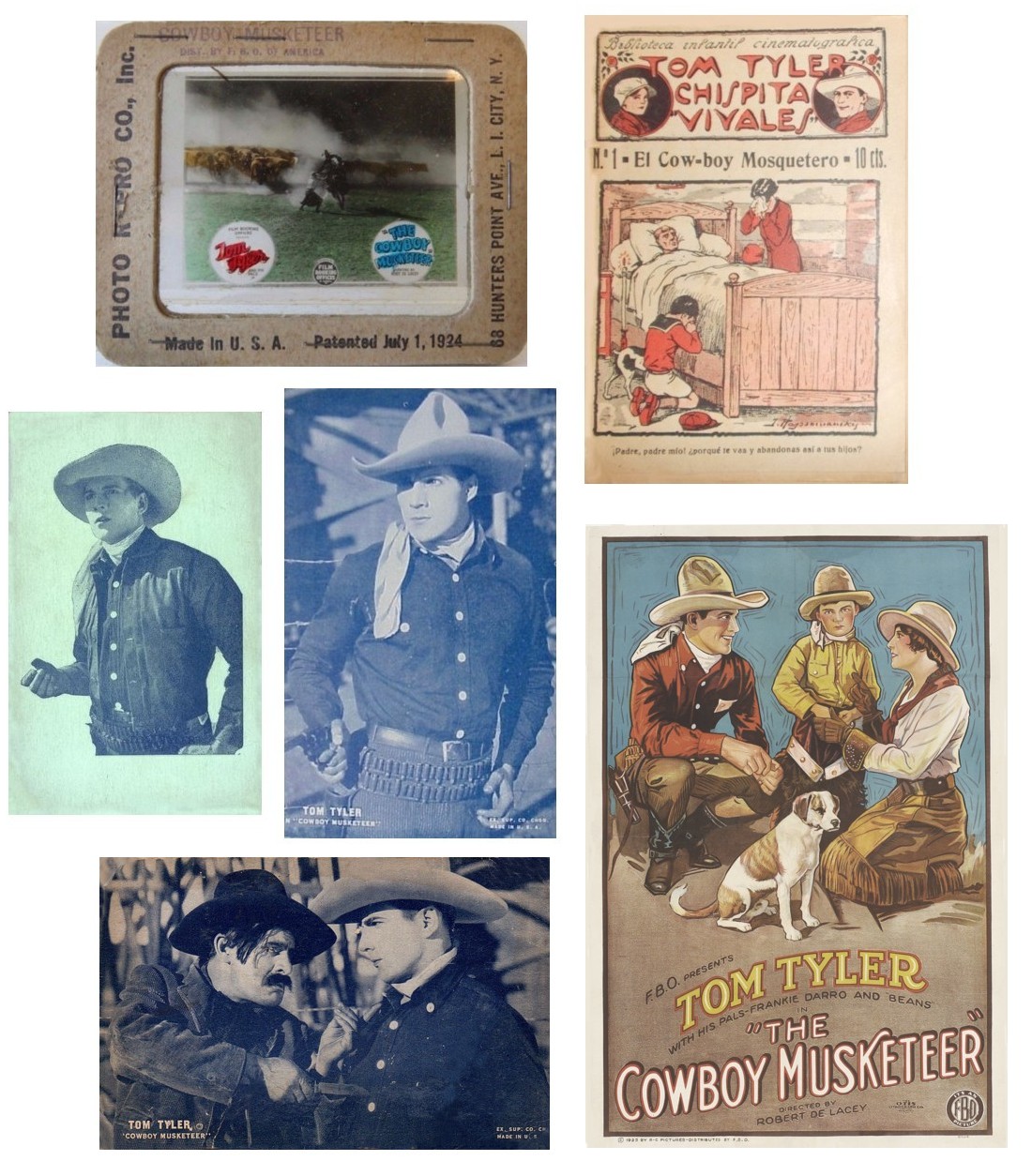 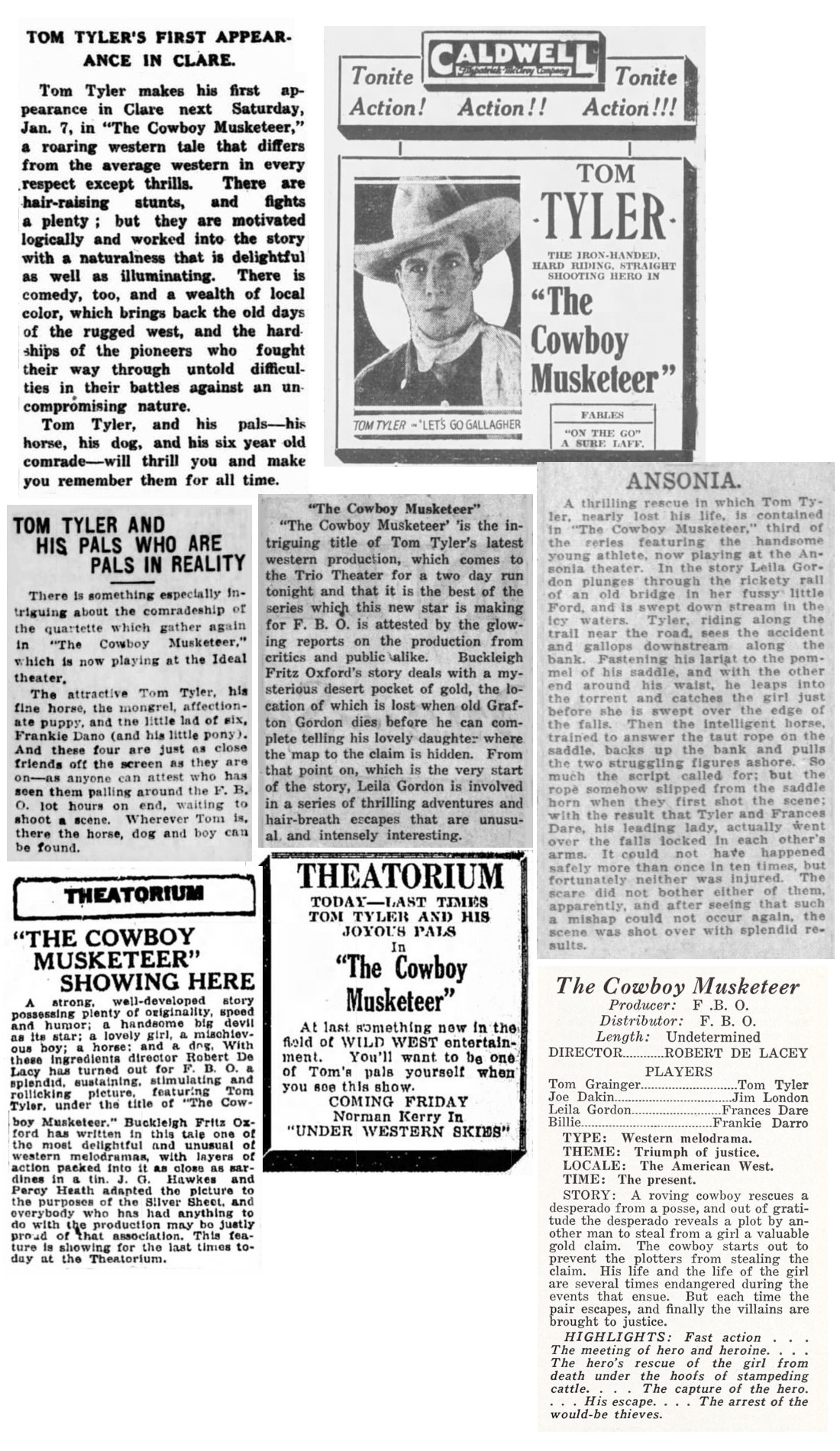 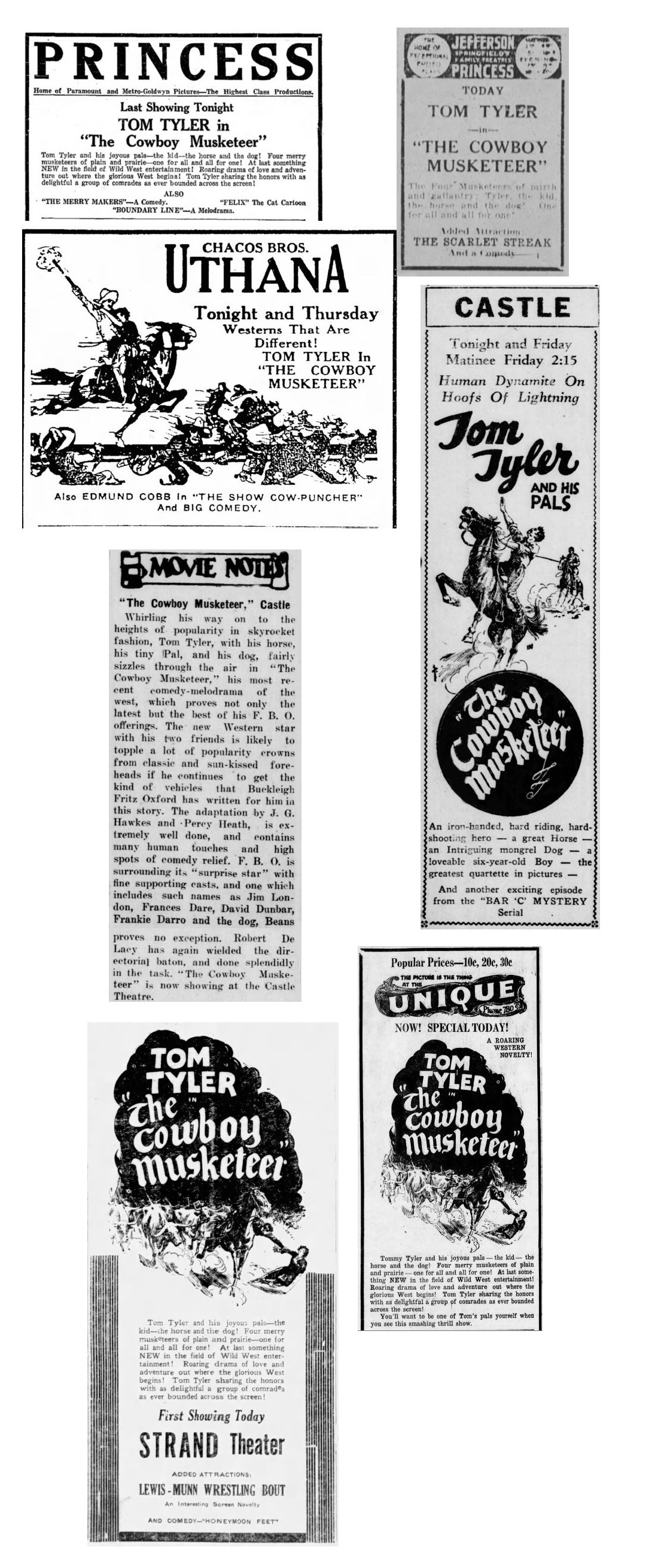 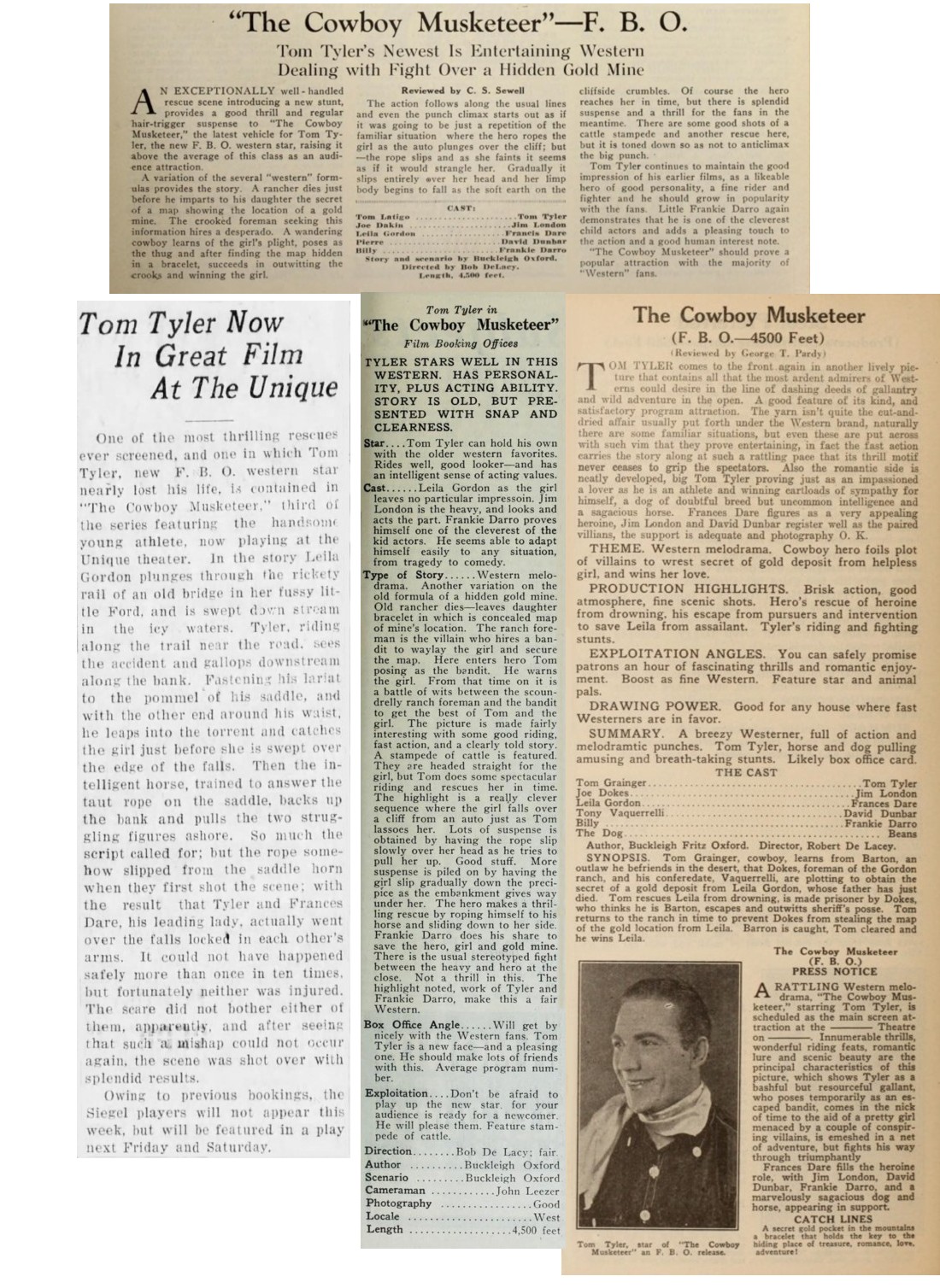