So tired keeping my head up
so tired I'm getting fed up
- C. Scott & D. Dyer

Tom Masters is an itinerant cowboy in search of a friend when he meets up with a young lady named Mitza and her little brother, Tip. Unknown to Masters, there is a tyrant in the foothills in the Rockies named Ivan Petrovitch. Tom first encounters this foreigner when he catches Ivan beating a small boy. Tom immediately rescues the child then beats up Ivan. Ivan acknowledges to having met his physical match, and invites Tom with Tip and Mitza for a horseback ride through the mountains. Tom however gets ambushed then gets separated from his new friends and must rescue them after they are taken in by Ivan and his henchman, Boris Kosloff. Held prisoner in a cave in the mountains, Tom manages to free himself, and risks his life in order to set his friends free, including the one he originally set out to look for. In addition to that, Tom also discovers the gold mine that Ivan was hoarding, and returns the stolen wealth to the small community. Ivan is evil to the core, the exact opposite of everything Tom Masters embodies. leading our hero into an unexpected trap from which lies an uncertain escape. Tom finally manages to not only escape but rescue his friends and the rest of the small mining community. Much to his surprise, Tom discovers that Ivan is in fact Mitza’s uncle, even though he has romantic feelings for her.

“Tyrant of Red Gulch” was originally titled “Valley of Superstition” while during the filming stage. In the UK, this silent film was released as “The Sorcerer”. What really stands out in this Tom Tyler western is this: his enemy has a Russian name, as does his main henchman; even Tom’s love interest has a Russian name, implying that the entire community possibly settled in the foothills after traveling southward after crossing the Bering Strait. Two of the cast members were born outside the United States; Josephine Borio was born in Turin, Italy, and Serge (Sergei) Temoff was born in Harbin, Heilongjiang province, China.

Tom and his pals in a new kind of western thriller – a baffling drama of chilling mystery – a western classic with a new kind of kick (Lansing State Journal, Lansing, Michigan, June 27, 1929)

A story of a mysterious terror – of unseen death and unerring vengeance – of a dauntless fighter who snatched victory from defeat! (Palladium Item, Richmond, IN, September 6, 1929)

The terror – men blanched before his fury – deserted villages gave proof of his vengeance – the girl a cowboy loved cowered before his desire – with only the fighting courage of her lover to save her from disaster! (News-Journal, Mansfield, OH, May 9, 1929) 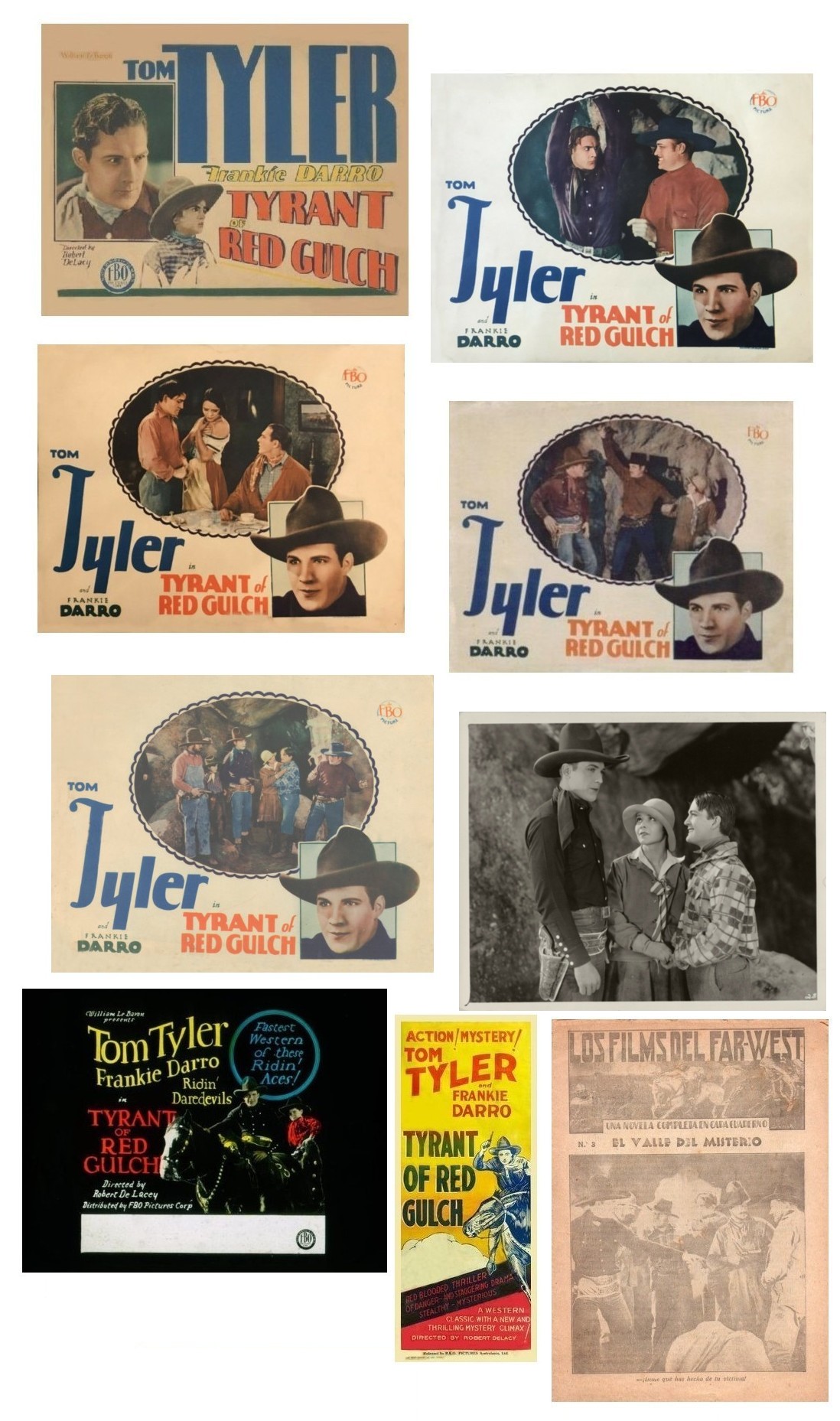 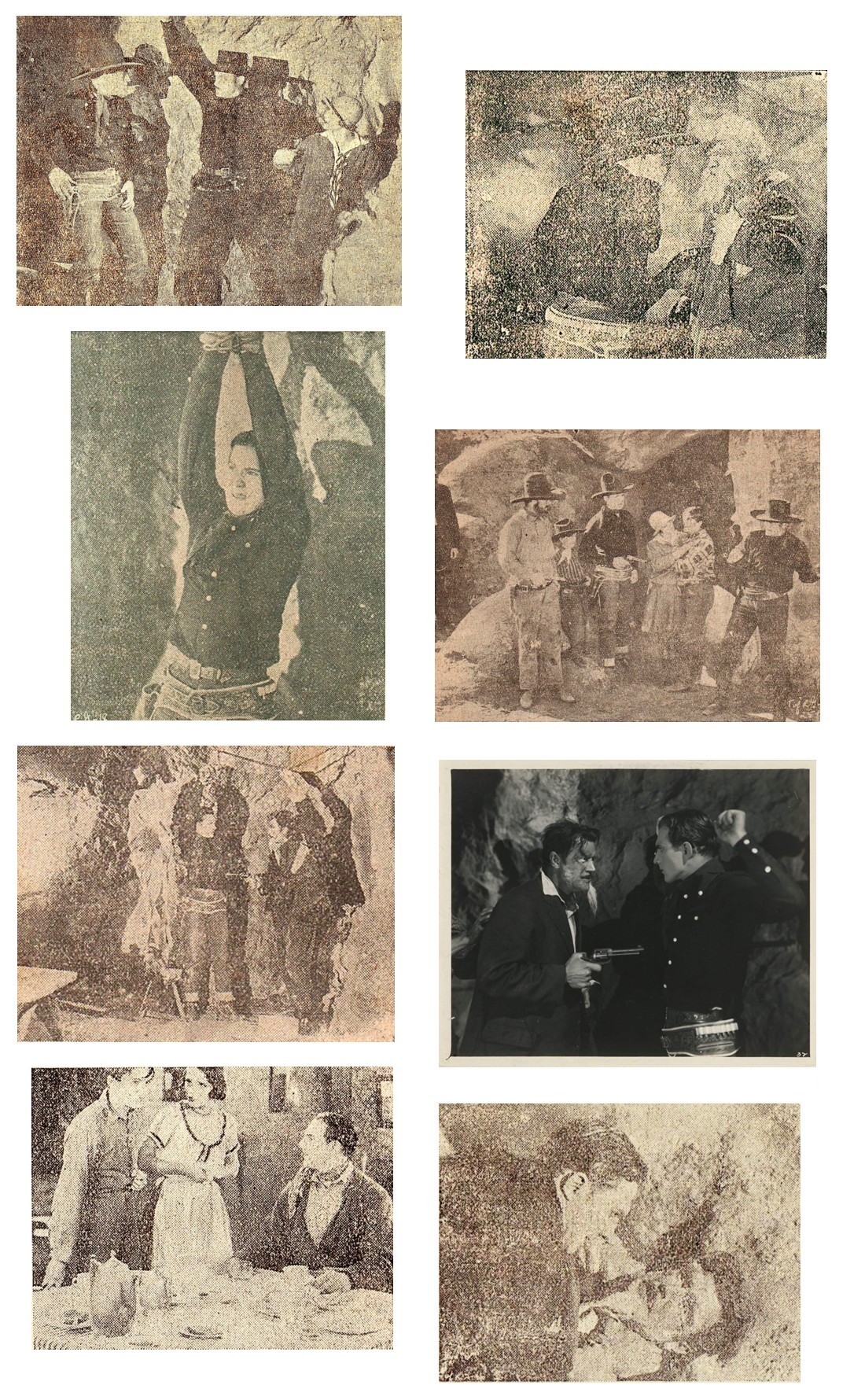 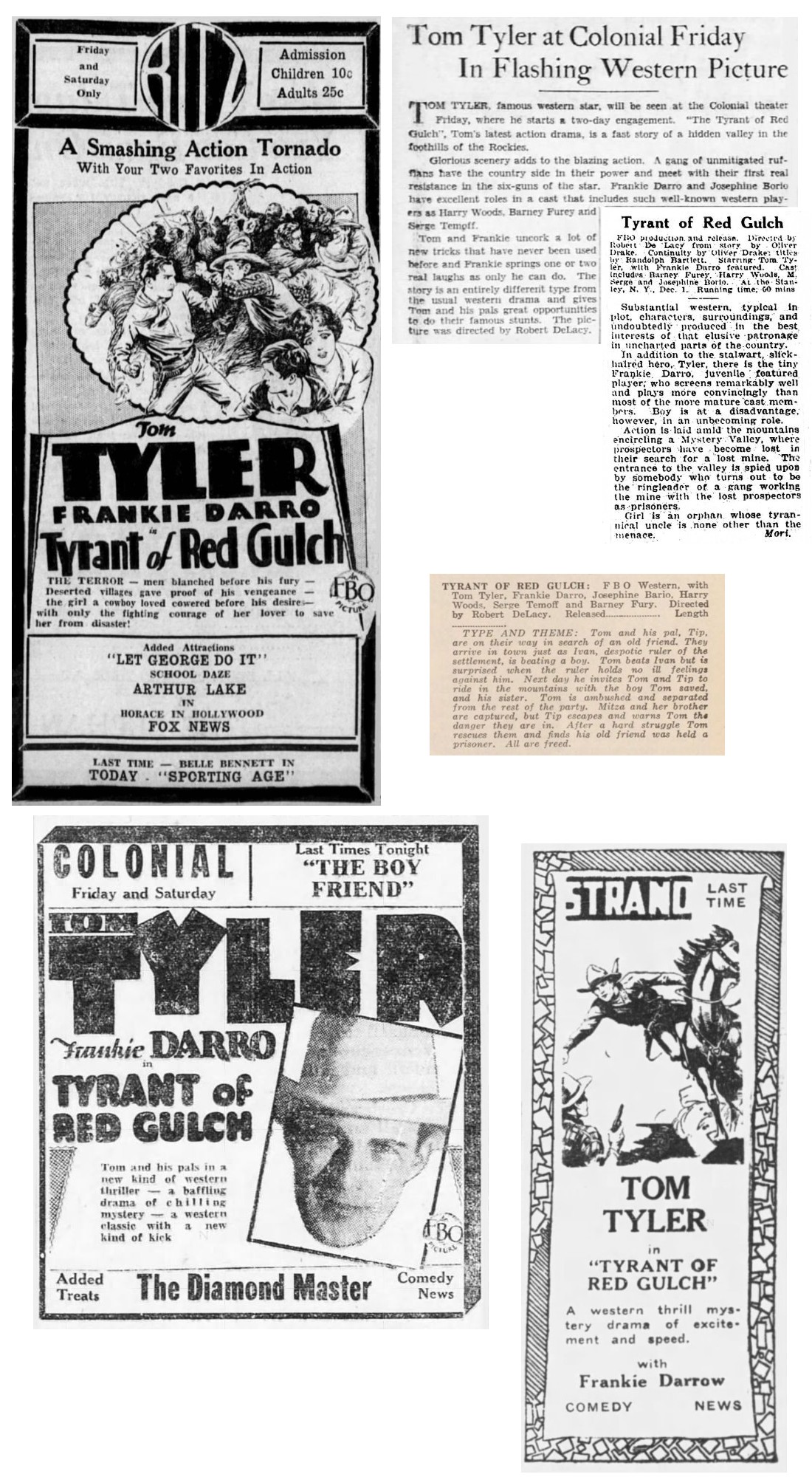 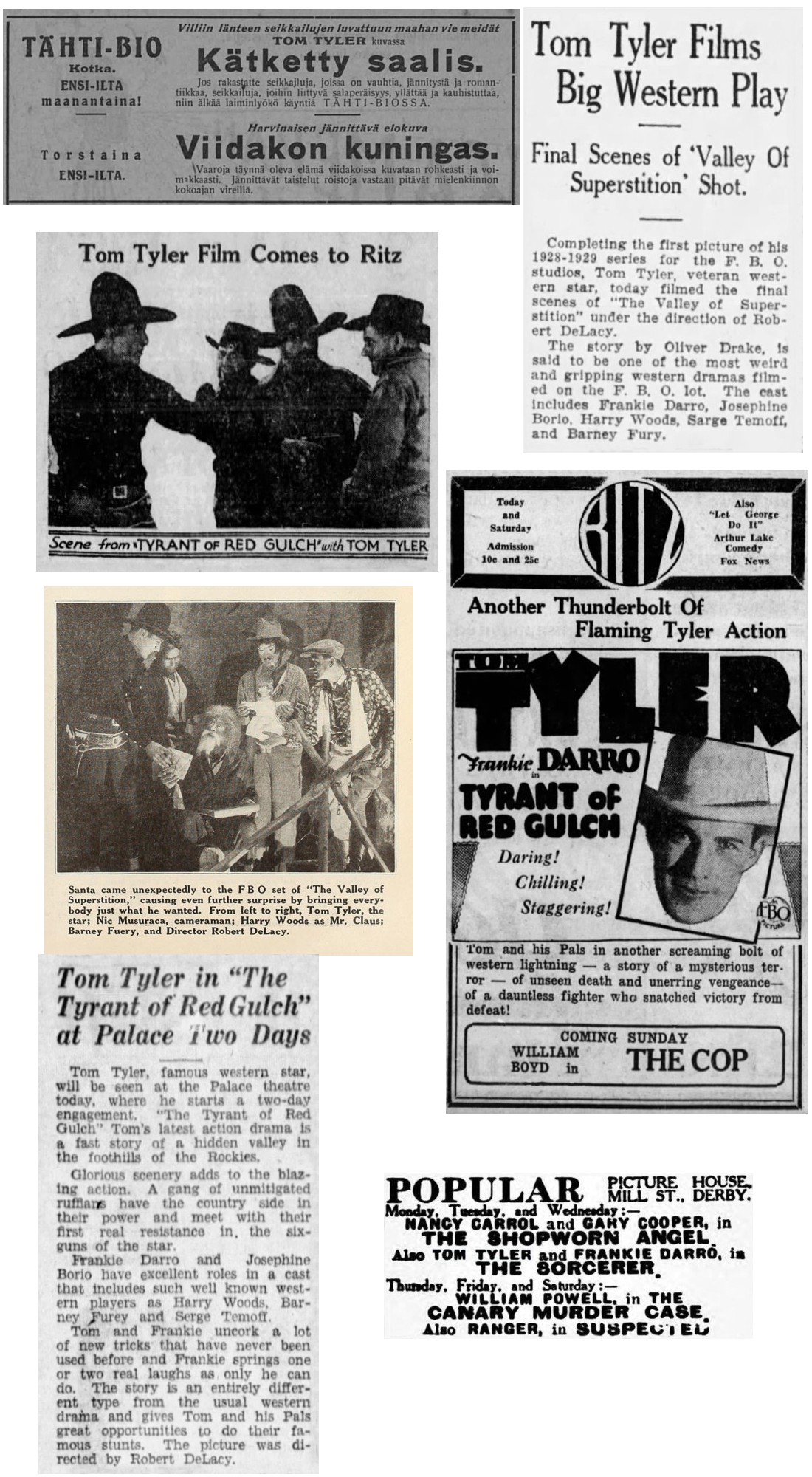 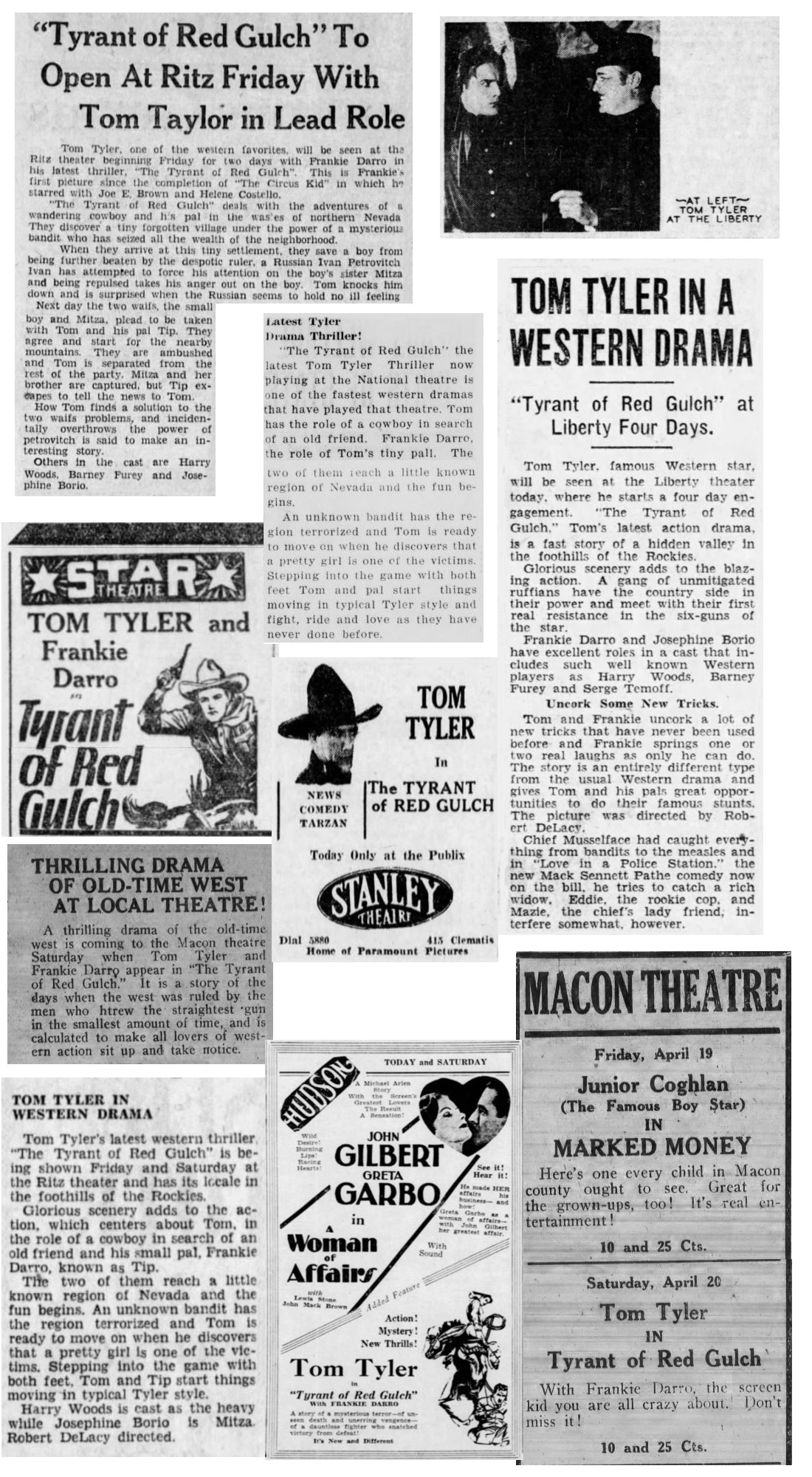 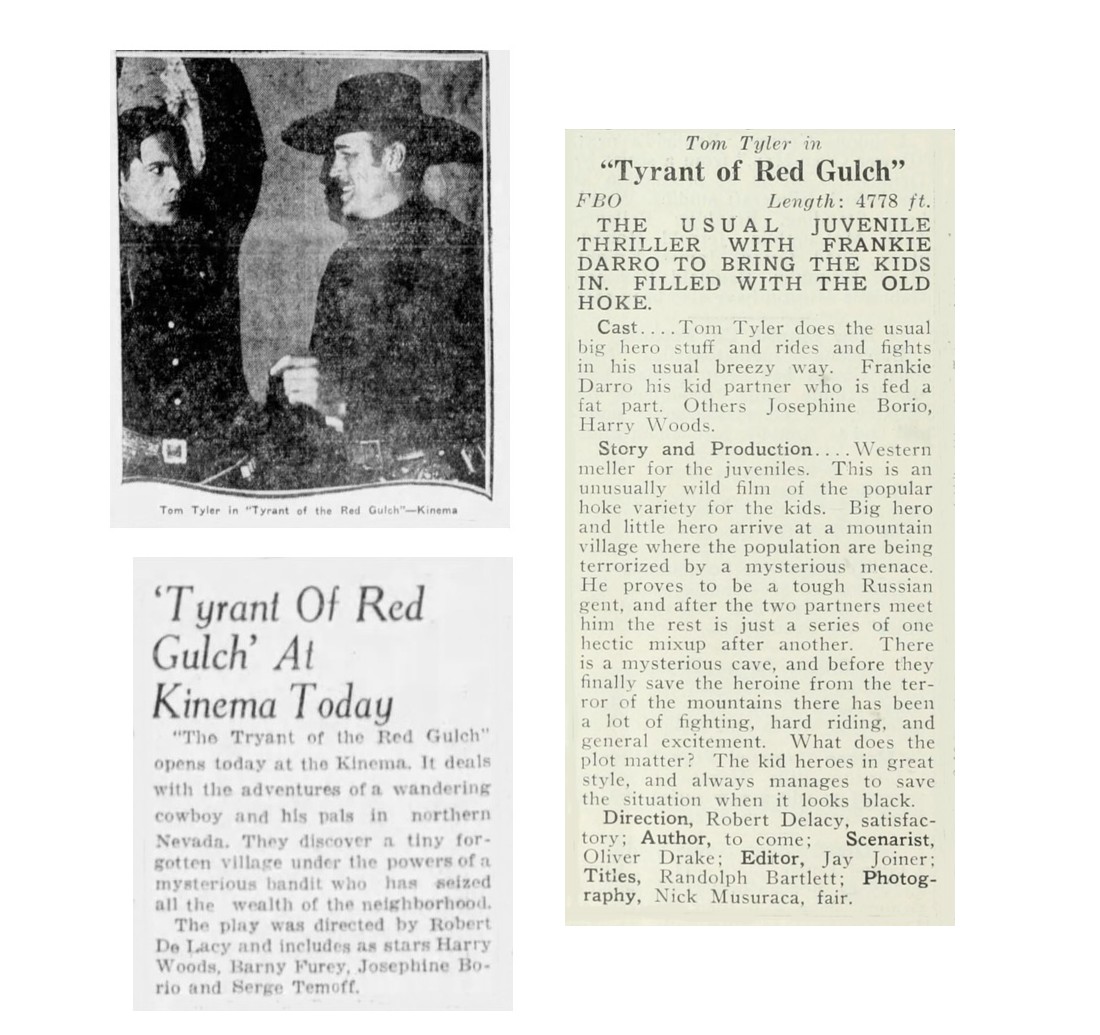 All composed text on this page is copyright Aventuras de Tom Tyler, 2018-2020.