Why did you talk me round
til love's sweet caress I found
- C. Scott & D. Dyer

Tom Buckley is a ranch foreman in love with Frances Morris and when he discovers that her brother Gerald stole money from a bank, does what he can to help him pay it back. Tom responds to a local advertisement seeking a man strong and brave enough to endure three rounds in the boxing ring with Battling Jack Riley, a prizefighter who happens to be exhibiting in town. The ad promises a thousand dollar prize to the willing contender, and knowing that he has what it takes to be a fighter, Tom responds to the ad and accepts the offer. His little brother Frankie encourages him to go through with it, who is his biggest and best supporter in everything he does.

On the night of the exhibition, Tom gets in the ring with Battling Jack Riley and withstands three rounds with him, endures a beating from the champion fighter but remains standing. Since Frances and Frankie accompanied Tom to the fight, Riley set his eye on Frances and takes a liking to her. At the end of the third round, Tom receives the $1000.00 prize, returns home with Frankie and Frances, and gives the money to Gerald who must return it to the bank. When Gerald is caught completely offguard, Riley shows up, kidnaps Gerald and also steals the thousand dollars. Riley is held hostage in a cabin on the ranch, and when Frankie sees the two of them, rushes to find Tom. Tom races on his horse to the cabin and in a knock-down drag-out fight, beats Riley into a pulp, frees Gerald, and wins the hand of Frances in the match. Tom receives a contract offer to be the new prizefighter but declines; he would much rather stay on the ranch with Frances and of course Frankie.

Al Kaufman, the man Tom Tyler took on in the boxing ring in “Red Hot Hoofs”, was a heavyweight boxer in real life. Hailing from North Dakota, Al fought Jack Johnson, Al Palzer, and Luther McCarty during his career from 1905 to 1915. Individuals who have seen Tom Tyler's “Rip Roarin' Buckaroo” (1936) will have some idea of what Tom looks like dressed as a prizefighter and playing the role well. Many Hollywood trade publications mention the titles “Hearts and Hoofs” and “Cow Punching for Cupid” although neither are in Tom's existing filmography. Chances are “Red Hot Hoofs” was the final title for both of the previous title names. (Note: A late ID from The Film Daily August 20, 1926 shows that "Cow Punching for Cupid" was retitled "Tom and His Pals".)

A gripping story of flying fists - of the skill and cunning of the prize ring matched against the courage of an Arizona cowboy. Of the dauntless love of a fighting hero - who won- and lost - then won again. A tale of lost hopes and desperate endeavor. (The Daily Argus-Leader, Sioux Falls, SD, October 22, 1927) 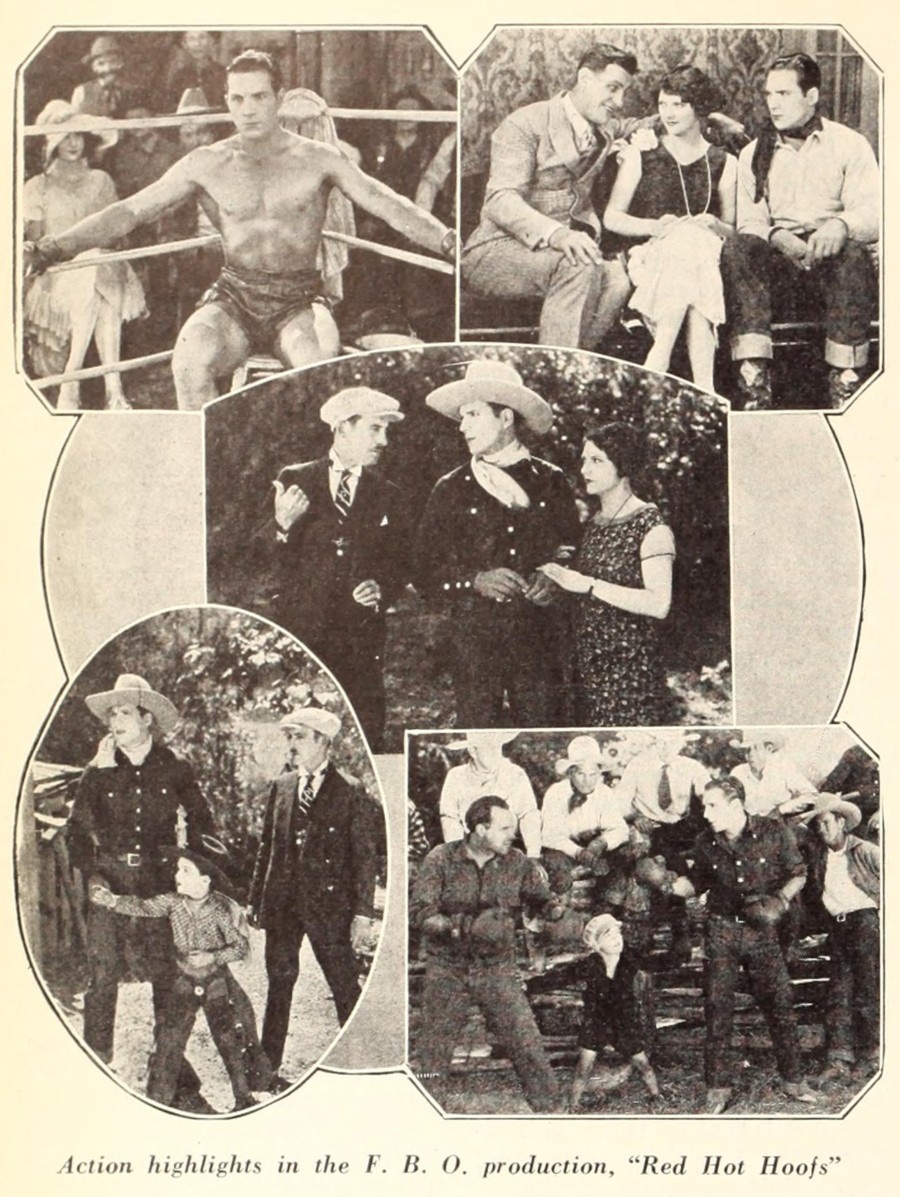 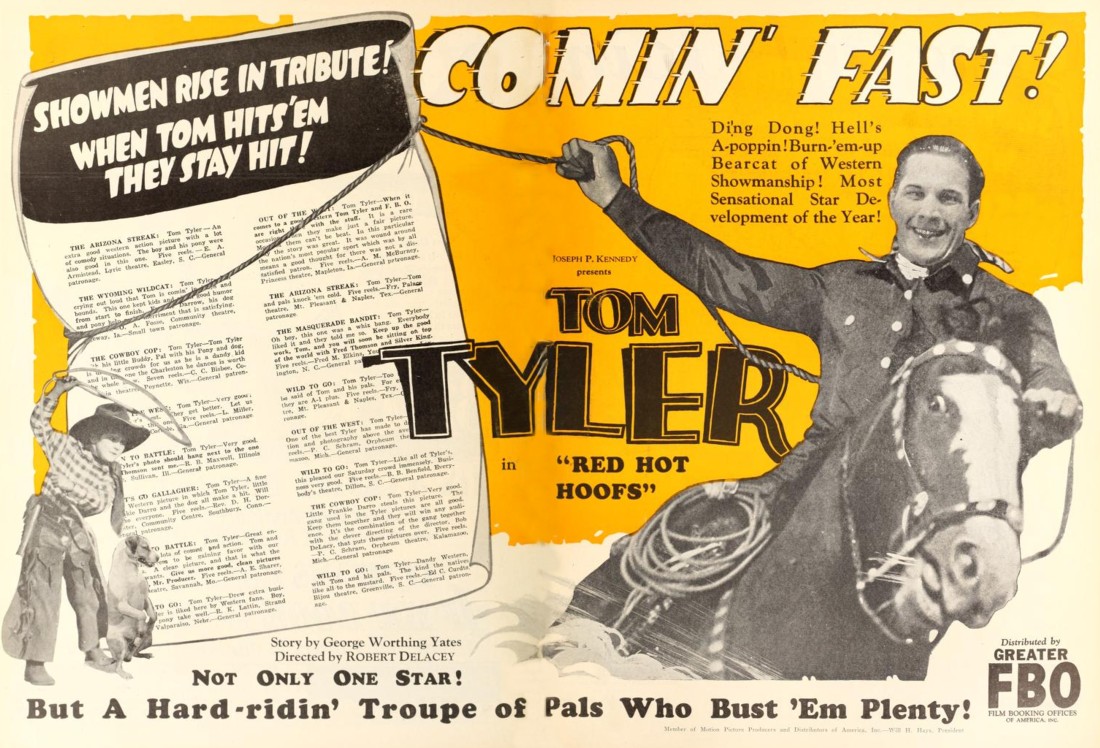 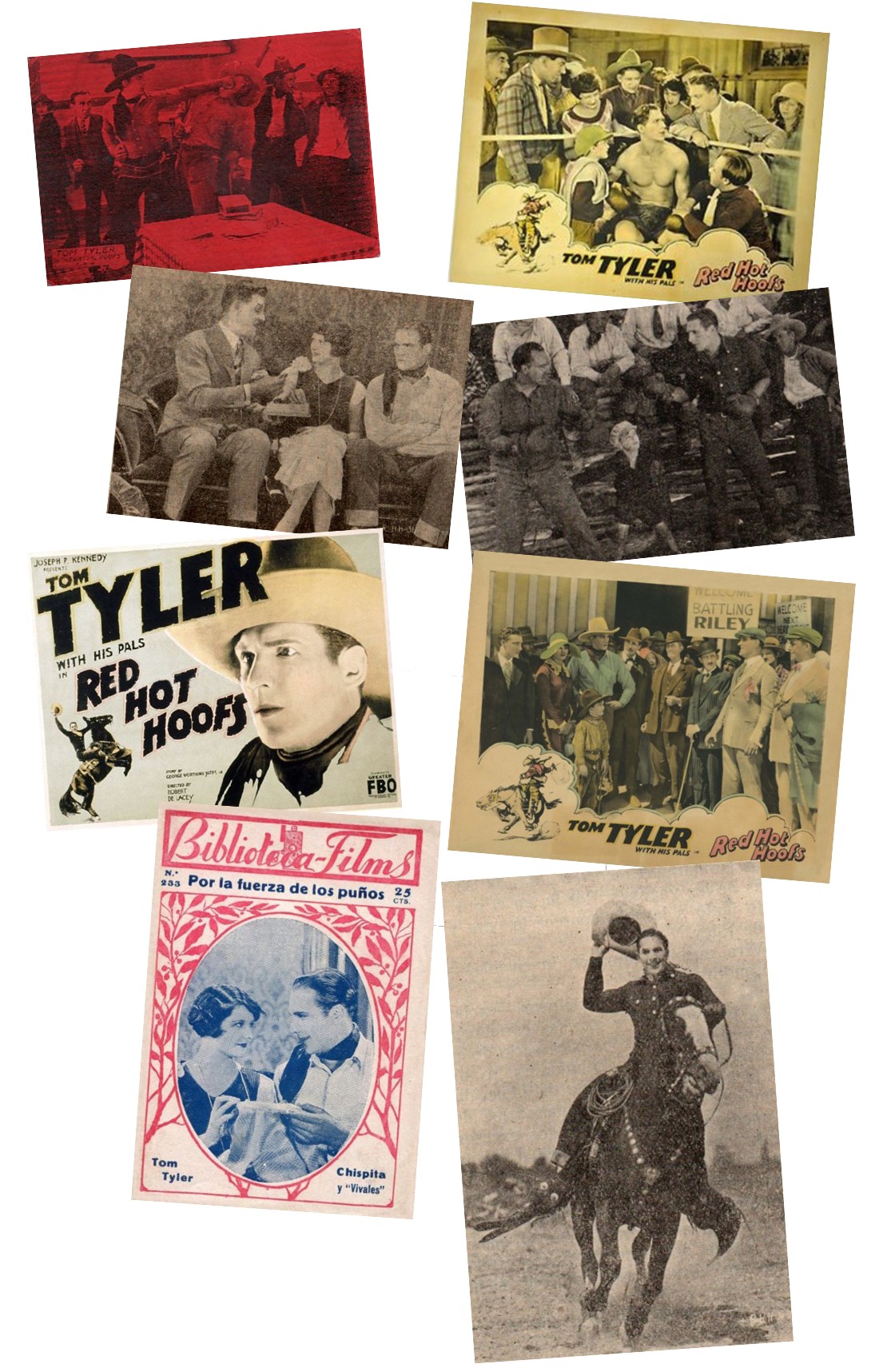 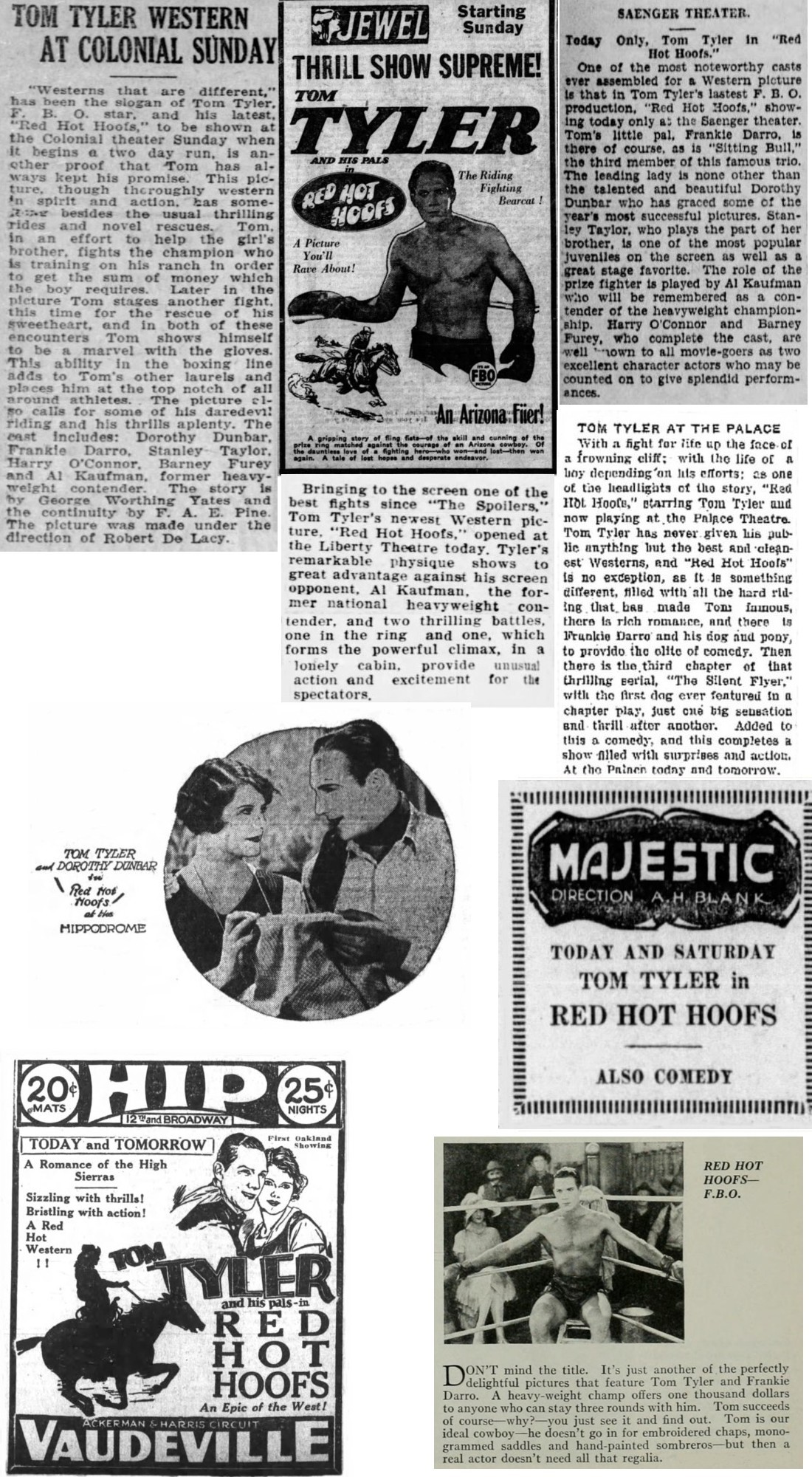 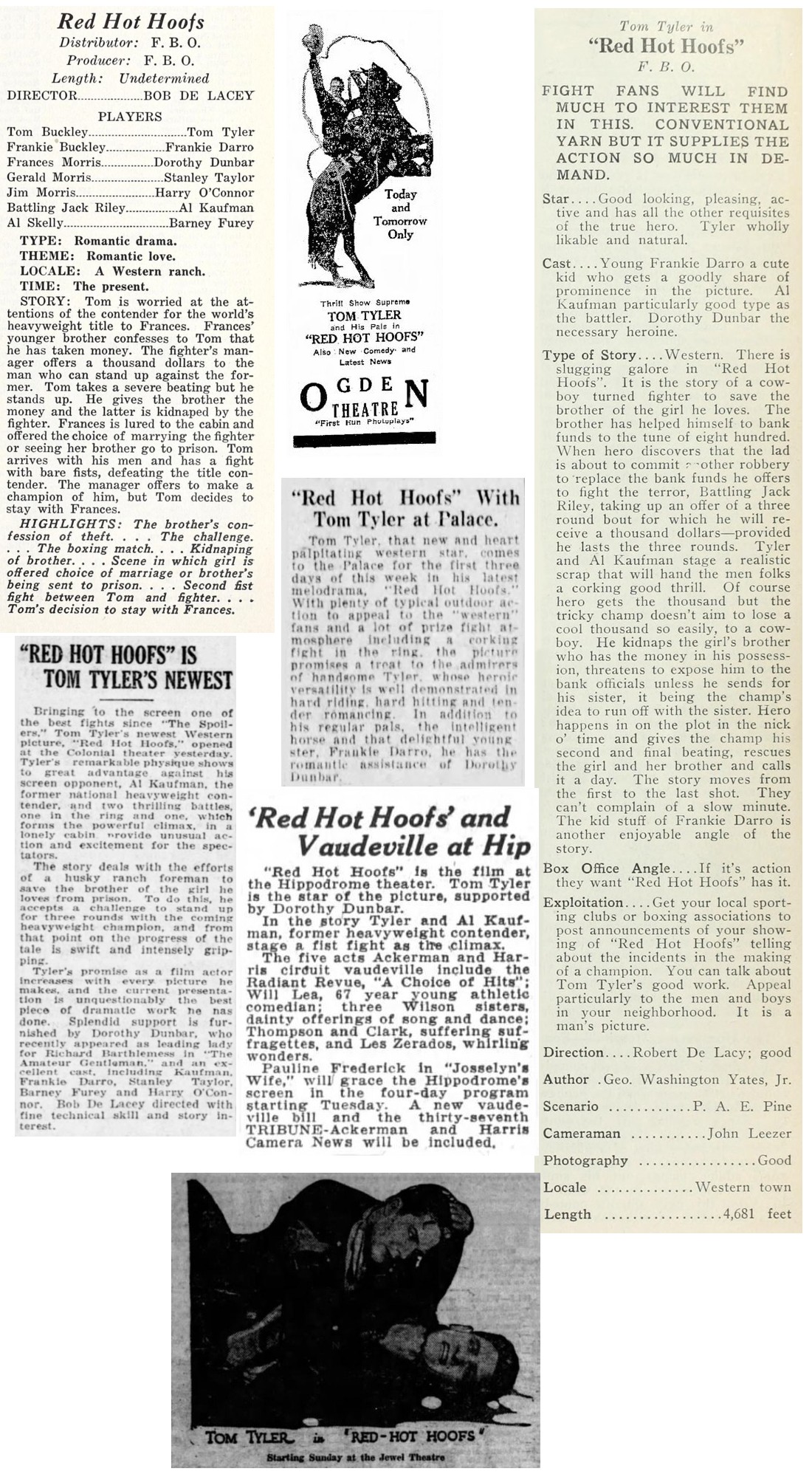 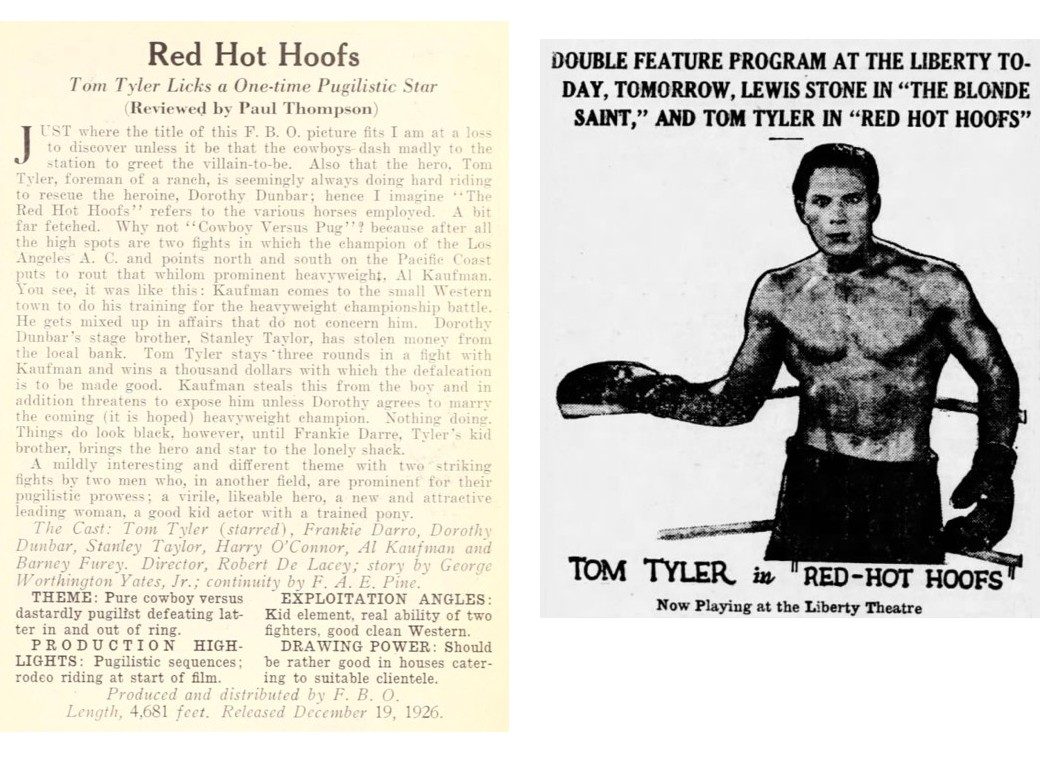